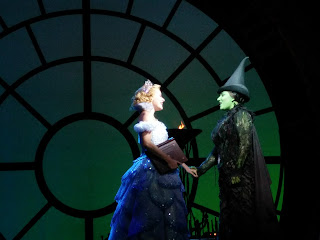 Wicked has a great score going for it. That along with quirky-fantastical set designs and costumes should be enough to make theatergoers buy a ticket. But the musical adaptation of the Gregory Maguire novel refuses to be another song-and-dance extravaganza. At its core are characters ready to be remembered.

While the title suggests an origin story of L. Frank Baum’s green-skinned witch (from his children’s classic, The Wonderful Wizard of Oz), the musical, whether deliberately or not, highlights the bond between Elphaba “The Wicked Witch of the West” and Galinda “The Good Witch of the South.” And it understands female friendships rather well — the insecurity, the jealousy, the preoccupation with appearance.

Galinda is just written to be adored — by her peers for her charm; by the audience for her antics. She’s a smart blonde (It’s not about aptitude, / It’s the way you’re viewed, / So it’s very shrewd to be / Very, very popular / Like me). But as immature as she may be, you cannot question her conscience. On the other hand, what’s admirable about Elphaba’s reinterpretation is that despite being an outcast, no thanks to her color, she doesn’t play victim. Neither is she self-deprecating nor resentful.

The two cross paths at Shiz University, and right away they express a mutual “unadulterated loathing.” Ladies are inclined to keep their feelings to themselves, and as a consequence resort to sly innuendoes and backstabbing when hurt or appalled — even now we somehow celebrate “throwing shade.” That’s why watching Glinda and Elphie tell exactly how they feel toward each other, to their faces, is refreshing.

But it’s during a wordless scene that their friendship begins. In the beautifully choreographed Dancing through life, we get our first glimpse of Glinda’s heart as she joins Elphie in her silly dance. A misstep would’ve made that sequence schmaltzy, but Carly Anderson (Galinda) and Jodie Steele (Elphaba) have made it tasteful and tender.

Musicals can rarely flesh out its characters, especially when it has a lot (plus an elaborate plot), like Wicked. It must be a feat of acting and stage direction, then, when the characters come out convincing.

Not even Emily Shaw’s brilliance, however, can salvage the poorly developed Nessarose, Elphie’s sister who would later be known as “The Wicked Witch of the East.” She turns from a sweet, level-headed girl in Act One into a vile, possessive nutcase in Act Two with no explanation in between, except for a time lapse. It’s not nice to spoon-feed the audience, but neither is it fair to require them to fill a colossal gap when the writer decides to be lazy.

The musical also assumes that the viewers know its source materials. Those who haven’t read either Maguire’s or Baum’s book, or seen the 1939 film, The Wizard of Oz, will find themselves confusified at some parts of the show. They might ask, why is there a huge metal dragon at the proscenium arch? Or why have thirteen hours in a clock? And, really, what’s the big deal about The Wizard?

All these weaknesses become forgivable — better yet forgotten — once the razzle-dazzle sets it.

Wicked has so much going for and in it — twists, wordplay, humor, drama, politics, love, death, the good, the bad. The best thing about it, though, has to be Elphie and Glinda sharing the stage. Much of mainstream female coming-of-age stories put a premium on “winning” against another girl. Here we have a pair of young ladies who have nothing in common end up with genuine concern for each other. Quite a triumph.

Fans and producers have their reasons for consuming and re-staging this 13-year-old musical (it’s currently on its second Manila run in just three years). We say as long as there’s a dearth of solid gal pal tales, there will always be room for Wicked.