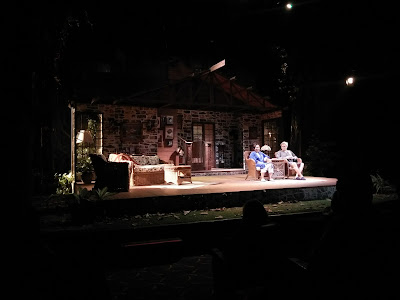 Miguel Faustmann’s set is inspired. The stage is transformed into a living room straight out of a magazine. Wicker chairs, stone walls, wooden floor and ceiling. Plants, lamps, picture frames. But it’s the slant of light, a convincing sunshine passing through the window, that lends it life. It fools you into thinking that what you’re about to witness is a family drama.

Far from it. Vanya and Sonia and Masha and Spike by Christopher Durang is hilarious, with gags leaning towards the downright silly. Imagine having a housekeeper-slash-soothsayer, a guy who hates wearing clothes, and an aspiring actress eager to take on the role of a molecule thrown into the mix of characters inhabiting present-day Pennsylvania.

The play, which has won a Tony Award in 2013 and is winning new audiences with Repertory Philippines’ production directed by Bart Guingona, tells the story of three siblings in their fifties: Vanya (Michael Williams) — gay and contented; Sonia (Rosalyn Perez) — spinster, lives and in love with Vanya (she’s adopted!); and Masha (Cherie Gil) — glamorous globe-trotting movie star. Peace is disturbed when the unpredictable cleaning lady Cassandra (played by scene-stealing Naths Everett) predicts disaster, after which Masha comes home with a 20-something boyfriend named Spike (Joaquin Valdes) and thoughts of selling the house.

Rep’s dream cast delivers (there are a few stuttering here and there — forgivable on an opening night): Williams’ Vanya is wry but kind. Reserved yet brimming with ideas. Indeed the type of uncle you’d like to hang out with. The challenge for him is to show real frustration once he unleashes his bottled up emotions.

Valdes is no doubt comfortable in his and Spike’s skin. He’s pitch-perfect as an immature, self-absorbed, always topless, muscle-flexing, multi-tasking, one-dimensional wannabe actor. The millennials might cry, “Misrepresentation!” — that is, if they didn’t have a sense of humor.

Art imitates life in the case of Gil, who is every bit like Masha (even she confesses so). Being known as local cinema’s quintessential villainess has its pros and cons, though. We can’t quite shake off her kontrabida image, but then it adds to the pleasure when we see her in moments that are tender and despairing.

Among the leads, Perez is the most successful at injecting pathos into her character. Sonia is wonderfully described by Durang: “She is unsure of herself, melancholy but keeps on hoping for impossible things.” Perez becomes all that and more. You’ll find yourself rooting for the siblings, but perhaps more sympathetic to Sonia.

It’s tempting to call Durang’s fictional family dysfunctional; but they’re as normal as can be, if by normal we mean feels insecure, pines for the past, craves attention, learns late. Let’s dare say theirs is another love story, only the protagonists are in midlife — a coming of middle-age tale, which, to be honest, we better see more of. That’s where we’re headed anyway.

What makes these characters memorable are their antics and the clever, often bitter lines they hurl at each other (“If everyone took antidepressants, Chekhov would have had nothing to write about”). But for all its wisecracking and literary allusions, Vanya and Sonia and Masha and Spike doesn’t pat itself on the back for being smart. Instead it (at least in Vanya’s tirade) bemoans the current confusion between information and knowledge, the loss of blissful innocence, without sounding like a nag afraid of change:

My point is the 50s were idiotic but I miss parts of them. When I was 13 I saw Goldfinger with Sean Connery as James Bond, and I didn’t get the meaning of the character name of “Pussy Galore.” Went right over my head.

Nowadays, three year olds get the joke. They can barely walk and they know what Pussy Galore means.


Yes there’s middle-age angst underneath the laughter. And heart. The play ends (spoiler) with Vanya, Sonia and Masha looking out the window, listening to The Beatles’ Here comes the sun — what a cliche. But Durang isn’t trying to be cool, just hopeful. Youth fades. When we get older, maybe we can still hang on to our wits and turn to the sunny side.
By Razel Estrella
Catalogued: Theater