There’s a scene in Annie where the orphan, Annie, billionaire Oliver Warbucks, and President Franklin Roosevelt and his cabinet sing Tomorrow at the White House; after which the powerful figures are revived with hope — something sorely missing before the young girl enters the room.

It’s difficult to be sold on that particular scene. Not because such serious characters have burst into song (hey, it’s a musical); but because they’ve gleefully burst into song, suddenly convinced that everything will be fine as the sun comes out tomorrow.

2.
Annie (with book by Thomas Meehan, music by Charles Strouse, and lyrics by Martin Charnin) is set in The Great Depression and revolves around a child’s unwavering search for her parents. One Christmas season, Oliver “Daddy” Warbucks scouts for an orphan to spend the holidays with, and Annie — who has been living in an orphanage under the supervision of the always-shouting drunkard Miss Hannigan — is chosen by the billionaire’s secretary, Grace Farrell. The two have been what each other needed: a parental figure for Annie, and a source of familial affection for the hard-working and hardened Warbucks.

The latter does everything to help the former, including offering a hefty sum of money to the couple who can prove that they are the parents of the child. As expected, impostors come in droves, and a pair that almost succeed in fooling everyone are Lily St. Regis and Rooster Hannigan, who is the brother of Miss Hannigan. The trio connive to pull off the ruse and agree to split the reward three-way.

With the aid of the FBI and President Roosevelt, no less, Daddy Warbucks and Annie learn that her real parents have died a long time ago. After the Hannigan siblings and St. Regis are caught, Daddy Warbucks proceeds to adopt Annie and celebrates Christmas with her.

The musical is currently staged by Full House Theater Company and Resorts World Manila under the direction of Michael Stuart Williams. Isabeli Araneta-Elizalde and Krystal Brimmer alternate for the role of Annie, and joining them are Michael De Mesa as Daddy Warbucks and Menchu Lauchengco-Yulo as Miss Hannigan. 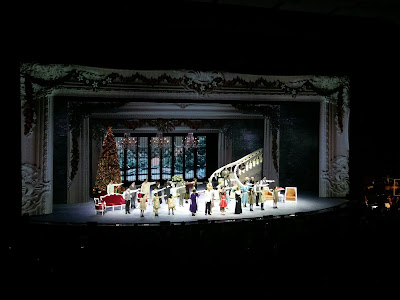 The cast play their roles with gusto — which can only do so much to humanize the underdeveloped characters, who sometimes make un-believable decisions. It’s puzzling, for example, how the busy and stressed out Warbucks (he snubs phone calls from heads of state) warms up to Annie the instant they meet. Or why Farrell is so taken by the little girl.

The production could’ve either gone melodramatic or comical in tone but instead it sits comfortably in the middle, that an emotion is barely stirred when a scene seems to call for it. A reason that Warbucks’ big realization about love trumping social influence and material possession isn’t as moving as it ought to be.

4.
One of the more poignant, emotionally charged moments in the musical is courtesy of Lauchengco-Yulo. Her solo number, Little Girls reveals Miss Hannigan’s heart, and in the end you root for her: “I’m an ordinary woman / with feelings / I’d like a man to nibble on my ear / But I’ll admit, no man has bit / so how come I’m the mother of the year?”

Lauchengco-Yulo makes an adorable Miss Hannigan — perhaps too adorable for the story’s own good. She’s not the strict, cruel antagonist some may expect her to be. It even appears like the children run circles around her. She earns your sympathy that when she’s implicated in fraud, you’ll wish they won’t put her in jail.

Annie is like a fairy that sprinkles magic dust of optimism wherever she goes. When her parents’ death is confirmed, she confesses, “I’ve always known they’re gone,” explaining that if they’re indeed alive and care about her, they’d be looking for her, too. She’s not completely naive, after all; but her disposition — and the entire show, for that matter — is too optimistic to be true.

The candy-coated message of hope may not be palatable, but the tale’s revival is rather timely. The year has witnessed extremely divisive socio-political events around the globe, and Annie serves as a reminder that at least we still have the luxury of creating something to look forward to — and that a two-hour escape at the theater doesn’t hurt.