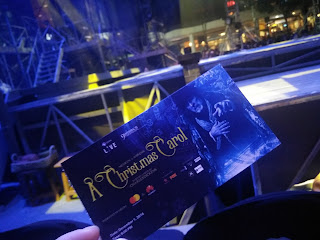 Bring theater to the crowd and not the other way around. That was the goal of 9 Works Theatrical and Globe when they presented Green Day’s American Idiot at the Globe Iconic Store in June. The punk rock band’s hits indeed captured the attention of passers-by, while the unroofed amphitheater allowed them a peep at the show. This December, the two companies are teaming up again to bring A Christmas Carol to everyone, non-ticket holders included.

The two musicals are appealing in very distinct ways. The former has pop songs going for it. However thin its plot may be, American Idiot can hold an audience with its music alone. A Christmas Carol, on the other hand, is based on one of the most enduring change-of-heart tales by Charles Dickens.

We’re familiar with the story: Ebenezer Scrooge, an old-aged miserly man, who abhors Christmas — and somehow life as it is — is visited by three spirits, each showing him his past, present, and future. Witnessing the errors of his ways and their consequences, Scrooge wakes on Christmas morning, happy and ready to redeem himself.

That sounded simple, even quite cheesy. But the undeniable charm of the Dickens’ novella lies in its narrator’s wry and disarming voice. Listen to him describe how dead Marley (Scrooge’s business partner) is:


Old Marley was as dead as a door-nail.

Mind! I don’t mean to say that I know, of my own knowledge, what there is particularly dead about a door-nail. I might have been inclined, myself, to regard a coffin-nail as the deadest piece of ironmongery in the trade. But the wisdom of our ancestors is in the simile; and my unhallowed hands shall not disturb it, or the Country’s done for. You will therefore permit me to repeat, emphatically, that Marley was as dead as a door-nail.


His body was transparent; so that Scrooge, observing him, and looking through his waistcoat, could see the two buttons on his coat behind.

Scrooge had often heard it said that Marley had no bowels, but he had never believed it until now.

Without an immediate use for narrators, it’s always interesting to see how A Christmas Carol is told in other medium. Film has visual flexibility, and the camera can zoom in on a character to show their hidden emotions. For a stage musical, one may expect clever use of props, detailed costume and make-up and, of course, a memorable score.

What is gained in 9 Works Theatrical’s production of Alan Menken, Lynn Ahrens, and Mike Ockrent’s musical adaptation of A Christmas Carol is intimacy. Globe Iconic Store is relatively small, and the stage is extended in the middle, with additional smaller stages in the corners. The audience, only a couple of feet away from the action, are privy to Scrooge’s nightmares — as if they’re dreaming them with him. They are so close to the actors that they’d be able to see a loose thread if there were any. From our vantage point, the designers and make-up artists have done an impeccable job. 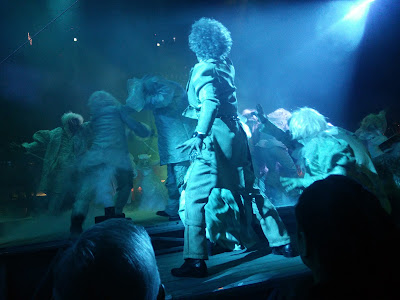 Marley’s entrance, where he’s later joined by an ensemble of ghosts, is particularly spooky and awe-inspiring; and it sets the tone of the show: there will be overzealous singing, dancing, and running around the amphitheater from a huge cast. Incidentally, this brand of energy is both the strength and weakness of the performance.

The production numbers are dramatic, yet they fail to bring out the drama within Scrooge. Despite its two-hour run (excluding a 15-minute intermission), the musical feels frantic and clipped that the touching moments tend to drown in the spectacle. It doesn’t help that the noises within (drone of industrial fans, whiz of fog machines) and outside the venue compete with the performers exchanging dialogues.

Scrooge’s transformation from “Bah! Humbug!” to “Hallo!” (which the audience already anticipates) is hardly felt. Other than the reason stated above, the problem is due to a dearth of humor. That ingredient that makes Ebenezer Scrooge, Ebenezer Scrooge and not just another grumpy old man; that makes a very unlikeable character, liked; and that makes what could’ve been a corny and didactic resolution, heart-warming is sorely missing onstage.

In the book’s preface, Dickens wrote that he has endeavored to “raise the Ghost of an Idea” and hopes that it haunts his readers’ houses pleasantly. Safe to say that he got his wish. Since its publication in 1843, A Christmas Carol has lived on that we’re still talking about and reinterpreting it. The musical adaptation will surely arouse curiosity and may send shivers of joy to any spectator, though it’s doubtful that it’ll leave a lasting impression.