For every undergraduate who dies a little when the alarm clock says it’s time to go to school, there is a student who jumps out of the bed, looking forward to another day in class. The classroom, for them, is a place to be inspired, challenged — and be themselves.

This isn’t high school or college we’re talking about, but a kind of schooling that only involves the most willing participants. These are the guitar lessons taken over the weekend by a once-aspiring musician now playing for his own pleasure; the graphic design tutorials attended by a publisher expanding his horizons; the summer acting workshops where the timid blooms into a captivating actor.

In this classroom is an intriguing mix of people, whose common denominator is a passion for the same subject. They have divergent backgrounds and distinct motivations for being there. One is painfully shy, the other boisterous. One is full of dreams, the other, of regrets. Somewhere, unbeknownst to everyone else, a secret alliance — or perhaps a romance — is forming. Outside, the teacher becomes a friend and the students extend their lessons.

These nuances are laid out in Richard Harris’ 1984 musical comedy Stepping Out, with music by Denis King and lyrics by Mary Stewart-David. Seven ladies and one gentleman meet every Thursday for a tap dance class under former Broadway star Mavis. There is no big plot here. Instead, we see an interweaving of the students’ and their teacher’s lives inside and outside of the dance hall. It’s a musical that runs on melodious, feel-good songs with words that hit home and characters that you recognize and root for. 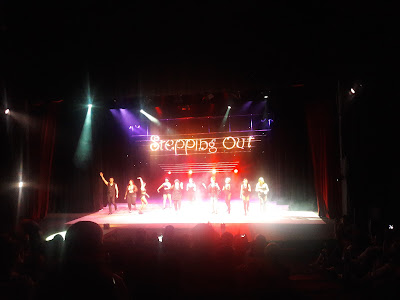 To close its 79th season, Repertory Philippines stages Stepping Out, directed by Jaime del Mundo and choreographed by Rose Borromeo. Leading the cast is veteran Joy Virata. Those who’ve been following her would delight in her role as the eccentric Englishwoman, wearing skimpy outfits (yes she does!) and blurting out the most honest, and therefore funniest, lines. “That’s what I like about you, you don’t try.”

She’s joined by Bituin Escalante, who’s practically pitch-perfect in everything she does onstage. But her role as the vivacious Rose is a personal favorite so far. Aside from Escalante’s impeccable comedic timing and stage presence, her lower register lends the songs a whole new dimension, especially the early showstopper Don’t Ask Me and the coquettish What Do Men Think.

I often hear colleagues wishing to go back to school or develop a new skill, and Stepping Out reminds me of this desire not only to learn but to do something entirely for oneself — and how sad it is to feel trapped. In a way, the musical mimics — almost to a heartbreaking degree — the realities of this dance called life.

The characters are colorful, yes, but are also ordinary. They worry about the usual things: love (“I want love, I need love, much too much”), success (“Chasing the glitter I never had”); change (“I would love to change but maybe it’s too soon or maybe it’s too late”). Even the class’s dance numbers don’t aspire to excellence (spoiler: the students won’t turn into master tap dancers as you may predict). What they offer is a promise that they’ll work as a unit and give their darn best to their performances.

Stepping Out is a welcome alternative to the massive productions running this month. Here is a show that’s deceptively simple and light-hearted on the surface. It is a poignant story charged with dry humor, awkward dancing, memorable music, and piercing dialogues. Trust me, their conversations are our conversations. Their missteps, no different than yours.