Almost, Maine and the business of subverting cliches

Judging by the title and poster — a cartoony rendition of a snowbound world with nothing but an empty bench, a few pine trees, and the words “almost” and “maine,” separated by a comma, written in child’s cursive (the i dotted with a heart) — Repertory Philippines’ Almost, Maine seems like a story that disguises depth with light-hearted humor. It almost is.

A man and a woman sit side by side on the familiar bench and discuss distance. Girl thinks they are, at that moment, closest to each other, while guy argues the exact opposite. Nothing else is presented to the audience that merits any further reading of the situation. It is as literal as it can get. And we’re interested.

What follows are eight vignettes about people in and out of love in the town of Almost, Maine. As a Valentine offering, Repertory Philippines brings the John Cariani play to Manila with actors Reb Atadero, Natalie Everett, Caisa Borromeo and Jamie Wilson taking on multiple roles under the direction of Bart Guingona (The Normal Heart).

“This is the first time I’m channeling my rom-com side,” says Guingona. “I’ve been known to do really complex, dark stuff, so when I read it, I went, ‘Whoa!’” Which is not to say that Almost, Maine is lacking in complexity and darkness — or perhaps Guingona together with the actors and creative team have already drawn out the play’s more thought-provoking facets.

This Hurts, for example, is a poignant exploration of love and pain through a handicapped man and his neighbor (though I’m curious about how you will like its ending). While Where it Went, where we learn how lovers drift apart, provides a cathartic shock of recognition with its sheer realism and relatability. “I decided that the play would be about loneliness and people overcoming it,” the director adds. 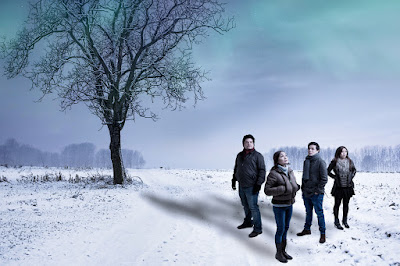 The entire narrative hinges on clichés and English idioms: a broken heart, which pieces jangle inside a paper bag, is fixed by a repairman; best friends falling for each other collapse repetitively on the ground; a shoe actually drops from the sky as a couple reaches an agreement. Given this, scenes can either spark philosophical musings where it works or leave a saccharine aftertaste where it doesn’t.

“That for me was a challenge, to try to not to make it cheesy, but at the same time bring out the cleverness of that whole conceit. That you’re getting a cliché being enacted literally. It gives elements of magic realism,” shares Guingona.

Some vignettes may also suffer from predictability, if not coming off as contrived. In Her Heart, an old love is named Wes, and a new love is named East. In Sad and Glad, a misspelled tattoo is suddenly given new meaning — too serendipitous (not to be true but) to be tasteful. Yet the obsession with turning a trope on its head is infectious. You’re compelled to guess what happens next and if it’s a complete surprise, the feeling is completely rewarding.

Almost, Maine tries to be a lot of things — whimsical, smart, profound, touching — and in doing so falls short in becoming sublime in any of them. It deserves to be seen, however, for its structure and ambition, most of all for this production’s talented cast, crew, and director, who have done their best to subvert clichés, love being the tritest of them all.