Bring me flowers. It'll make my day. Perfect gifts, they are: highly symbolic and practical. A bouquet of flowers is a burst of emotions. It's alive and real at the moment — it'll die soon. And so like feelings it must be renewed, reasserted over and over. And so bring me flowers again, and again.

Trinkets are tacky, food is messy, but flowers, you can assign any meaning to them and they unburden the receiver of clutter. Flowers discard themselves by wilting. 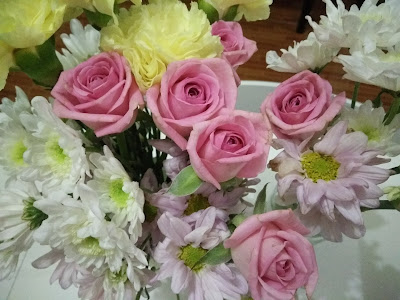 Teaching myself the art of arranging flowers, I came across this tip, which makes me think of a princess locked in a castle:


Sometimes people think they should set their vase of flowers in a sunny windowsill since that is where a plant would be happiest. However, cut flowers are actually the opposite of potted plants. They are at their peak of perfection. Sun and heat will encourage them to "mature" and thus quicken their demise. Instead, keep your cut flowers in a cool dark spot if you would like them to last as long as possible.