On the car ride home, right after watching a stage production of Green Day’s American Idiot, I thought of cats — the musical: on the one hand lambasted for its nonsense, if non-existent plot and sheer silliness (cats dancing and singing and fighting for a place in The Heavyside what?); and on the other hand loved by many, including me, for the playful poetry set to catchy tunes that can put today’s Top 40 to shame. American Idiot is quite the same: it’s less of a musical; more of a musical event.

Where the two shows dissociate is in tone, setting, intention, and everything else. The former is built in a fantastical world where you’re invited to have fun, while the latter is anchored in real life, in the now, and asks that you take it seriously.

Right off the bat it makes a statement. News reels and advertising clips flash on TV screens. The cast open their mouths and express aversion: “Don’t wanna be an American idiot.” Then we’re acquainted with lead characters Johnny, Will, and Tunny, who seem to be in their late 20s and are frustrated with the state of the nation, as well as their own lives, that they opt to leave for another city. Because maybe things will be better from thereon. 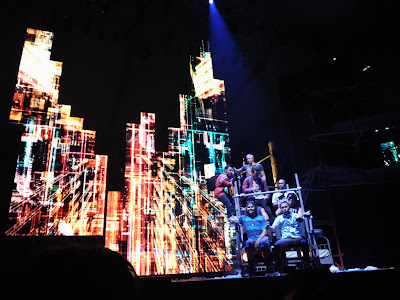 The first 15 minutes of American Idiot set up an expectation for a riveting story, as if telling the audience, Listen, we will discuss important matters — the personal, the political, love and war — it will be visceral. When Johnny and Tunny (Will has to stay behind after learning his girlfriend is pregnant) take the bus ride to The City, we hop along. But once they alight, their stories proceed in unclear directions, and we’re lost.

This gap in narration — or perhaps finding out in the end that it’s a simplistic narrative we’re following after all — weakens the emotional parts of the performances. Storytelling-wise, the characters haven’t gone through enough to earn their anger. It’s up to the actors, the creative team, and Green Day’s music to elicit sympathy from the audience.

Theater advocates in the past few years have been on a crusade to develop the theater community — to produce diverse and quality shows, establish new outfits, and most of all attract more theater-goers. 9 Works Theatrical and Globe try a different approach by bringing theater to the people. The two companies are staging American Idiot to christen the Globe Iconic Store at Bonificaio High Street in Taguig City and showcase the strengths of the venue — huge HD billboards, impeccable sound and light systems, and accessibility.

The Globe Iconic Store is right at the BHS Amphitheater, flanked by rows of stores and restaurants. As an open area, passers-by and non-ticket holders can catch the show — something that both 9 Works Theatrical and Globe encourage. Because the goal is to engage the unengaged and keep them hooked. The ambition recalls the concept of gateways in popular culture (gateway bands, book gateways): that which lured you into diving into the unknown.

Despite its shortcomings, American Idiot is the piece that can do the job for theater. Who wouldn’t stop upon hearing the impassioned drum beats of Are we the waiting? And linger because even though it’s been overplayed on the radio (and over-memed on the internet), they’d like to hear Wake me up when September ends once more. I won’t dare call it an attempt at nostalgia, for that’s a cheap trick and American Idiot is not pulling it. Instead, the show reminds everyone the genius of Green Day. 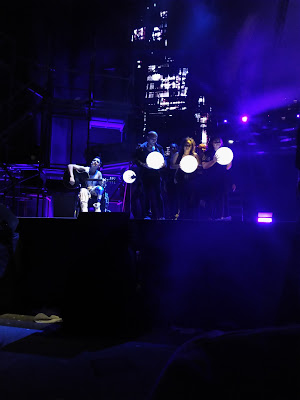 To listen to the band’s music is to ride a horse on a run: it’s fast, proud, and wild; but somehow you know you won’t fall and you’ll gladly go wherever it goes. Where it slows down and gaits, it proves that punk rock is no stranger to elegant melody — something that the stage adaptation has successfully brought out.

The different voices and arrangements reveal a whole new dimension to the Green Day songs. It must help that the cast is composed of professional actors and musicians. Wolfgang frontman Basti Artadi fit the bill as the charismatic but dangerous St. Jimmy, the alter-ego of Johnny (played by former Rivermaya frontman Jason Fernandez). Also in the mix is Chicosci lead vocalist Miggy Chavez, who plays Will and sings with clarity and pathos.

A clear standout, though, is Yanah Laurel, who — and I will be crucified for this — steals the rockstar crown from Artadi. With her voice and stage presence, she powers through the loud instruments and cacophony of lights. When she inquires, “Where have all the bastards gone?” you feel like scrambling for answers.

Before the show started, Globe presented a short film communicating its foray into live entertainment. Sounds blasted, digital images swim in the billboard screens on each side of the stage, and laser lights danced in the dark (did I just describe the last EDM party you attended?). All this technology was employed in American Idiot.

The mood was festive and for a time I was convinced that I was in fact watching a concert; and that’s enough to keep someone like me arrested. Director Robbie Guevara and the actors admit that performing outdoors — exposed to the elements and a hesitant crowd — is a challenge. But they’re on a mission to win audiences and they won’t have it any other way.

If there’s one thing 9 Works Theatrical and Globe are truly pioneering in this production, it’s undermining the snobbishness associated with theater. Here, theater is just among the visitors’ many distractions, outright competing for attention. It’s funny when you think about it, but that’s the reality, and we can rest easy knowing how distractions can escalate into passions.