LA-based painter Nate Frizzell and I share something in common: last year saw our introduction to murals — him making it and me seeing (not looking at) it. The experience was courtesy of LeBasse Projects, Honeycomb Communities and Bonifacio Arts Foundation, Inc., who initiated the ArtBGC Mural Festival.

To me, creating murals is putting life to an otherwise dull wall, adding any form of emotion to the cold concrete that makes a city. If they should say anything more that, I have no idea. And neither do Nate. “I worry about that,” he replied when I asked what makes a mural work — if it should suit its environment and if it should leave comment. “If there were more time, I’d love to shoot local kids running and playing in the city, so that I’d have that kind of reference. But other than that, I think it’s good to have something completely outside of the area. If this keeps going, if the city gets covered with more art from around the world, it’s going to be amazing in the next few years and it’ll be totally different from anywhere else around the world.” 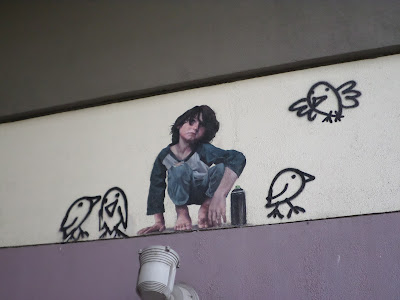 Nate is among the group of international artists invited to lend their talents and paint the walls of BGC’s skyscrapers and quiet nooks. Because he had always been confined to the galleries, he hesitated to paint a mural at first. What convinced him to become part of ArtBGC? “Just a trip to the Philippines made me say yes,” he shared.

Where his companions filled up meters upon daunting meters of walls with colors, Nate let space be space. “I didn’t know what I was doing,” he said, recalling his debut in the festival and the art form. “Everyone had this giant wall and it was going to be impressive, and I was just going to do these little paintings.” These little paintings called to the crowd, though, as if telling them, Share this space with me. “When I kept going, I saw the people’s reactions and how intimate they could be. You actually have to go to the wall and interact with. Unlike the giant walls where you have to go across the street just to see what’s going on. And I liked how personal it became.”

Since then he was hooked, did a couple of murals in LA and now he’s back to do more at BGC for the festival’s sophomore run. “In the art gallery, it’s sterilized. There’s no touching. Here I like that you can go touch it, interact and play with it. It’s a lot more fun,” he said. 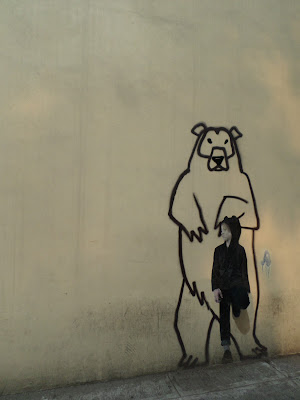 One of his most photographed works is that of the young boy standing in front of a bear. “When you go look at the bear with the kid, the kid has his leg up on the wall. And if you look at the wall, it’s completely dirty because everyone goes up and puts their foot up on the wall,” Nate said, amused by how the artwork pulls people in.

And why wouldn’t they be drawn? Whether it’s our innate fascination with animals, or our beastly core responding to the sight of the undomesticated hanging about in the civilized world, Nate’s pawed, clawed, and fanged friends easily become ours as well.

Nate has used animal heads as masks in many of his works. “When I first started, I liked painting figures but I thought it was odd for people to have these strangers in their house,” he explained. “At first I used masks so that people can connect with it more instead of just painting a stranger — so they can put themselves in the painting.”

This high regard for inspiring intimacy must’ve made him and his murals a favorite among onlookers. It’s not only passers-by who get curious about his works, but people from faraway cities looking at photos of his paintings. Many of them ask the exact location of a certain mural — and we’re not telling. Because it’s a nice surprise if you find it on your own. 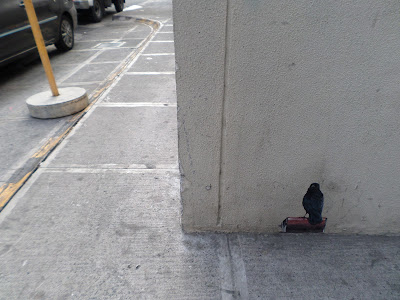 Nate has hidden gems all over BGC. If you happen to bump into a young girl in a floral dress or a bird perching atop a spray paint can, and you feel something inside you stir, thank Nate.