A shade tacky, a fistful of fun

You have to acknowledge, though, that whatever the critics say, Fifty Shades has its fair share of readers and drawing such passionate response from people, whether positive or negative, is always a point of interest. In fact when the negative reviews exploded, it aroused in me a curiosity: I need to read this. I need to be socially aware.

Given the books’ popularity, the inevitable happened: a movie adaption — which also received a collective thumbs down from critics and vocal viewers. But the appeal of Christian Grey and Anastasia Steele’s world is so strong that we’re still talking about it.

And the conversation is now taken to the stage. 50 Shades! The Musical Parody is that event where everyone can share a laugh over Grey’s excesses, Steele’s ignorance, and the readers who hang on to every word of the two’s love story.

The musical — produced by Marshall Cordell, Al Samuels, and Emily Dorezas; and
written by Dorezas and Samuels with Amanda Davis, Jody Shelton, Ashley Ward, and Dan Wessels — will run in Manila from Feb. 12 to Mar. 1 at the Carlos P. Romulo Auditorium in RCBC, Makati. After which the show will be toured in other Asian countries. 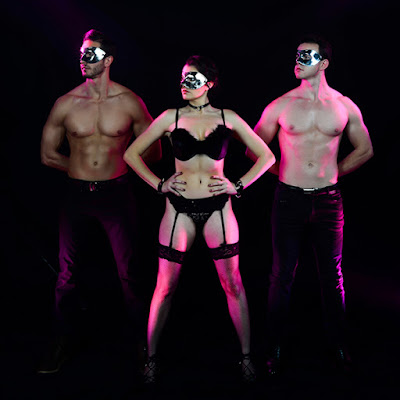 A musical seems a logical option. The format lends itself to gratuity, exaggerations, and downright ridiculousness. As they say, who breaks into song in real life anyway?

Speaking of songs, it’s the musical parody’s first problem. The lyrics and melodies are less than exciting, though it’s not without euphonic gems. A clear standout is the 11 o’clock number 50 Shades! (But maybe it’s thanks to the vocal chops and bravado of Kaitlyn Frotton, who plays one of the women engrossed in James’ novel and leads her fellow housewives in belting out this song.)

Red Room is another engaging number, which undermines the darkness and danger of Grey’s sex playground with its nursery-rhyme type of rhythm. There’s also Any Other Couple, which pokes fun at Grey and Steele’s unconventional way of showing love to each other through a duet that resembles pop karaoke ballads.

What’s risky about a parody is that it might become what it criticizes. 50 Shades! is guilty of jokes bordering on tacky — those which could’ve been told by your high school mate or little brother. But when it hits the mark, boy it’s laugh-out-loud, fall-off-your-seat hilarious.

If the musical succeeds in Manila, it will be because of its cast. Each one of them is talented, energetic, has brilliant comedic timing, and knows how to capture the audience’ attention. Most of all they believe so much in the material that you will end up getting convinced, too, and find yourself enjoying the ride.

As for the rest of the cast, they simply hope that the audience will have fun. I have no doubt they will.