Before Benedict Cumberbatch and Robert Downey Jr. became THE Sherlock Holmes portrayers for TV and film, respectively, there was William Gillette, who took on the role of the consulting detective on film, stage, and radio in the early 1900s.

In Ken Ludwig’s The Game’s Afoot, Gillette becomes the main character of a crime story and gets to “play Sherlock” in two ways: first, as an actor who has recently starred as Sherlock Holmes in a Broadway production; and second, as a gunshot victim off to discover who the perpetrator is and their motive.

The show opens with the final scene of Gillette’s theatrical performance, where he is shot in the shoulder just as he’s about to take a bow. Later on he’s back to his Connecticut house, where he recovers, spending Christmas with his mother, co-actors, and a theater critic. As it can’t be avoided, instead of the usual holiday conversation, they talk about Gillette’s shooting and how it may be connected to recent mysterious deaths. 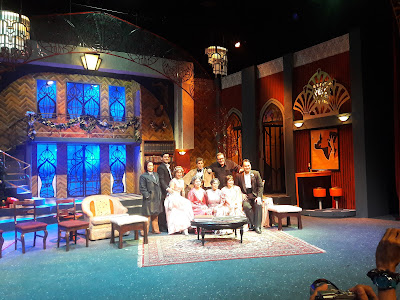 Repertory Philippines (Rep) welcomes the new year and its 79th season with The Game’s Afoot, with a desire to bring more people to the theater. “Everybody loves a mystery,” says Rep artistic director Joy Virata, who also plays Gillette’s mother, Martha in the show. Like the Arthur Conan Doyle page-turners, The Game’s Afoot is quick-paced, surprise-laden, with twists that are both unexpected and satisfying. Sherlock readers may expect in-depth, scientific discussions among the characters, but in place of these are snarky one-liners expertly delivered by a cast led by Virata, Paul Holme (William Gillette) and Pinky Amador (Daria Chase).

Holme is a grounded yet steadfast Gillette, while Virata is pitch-perfect as the frail, sensitive mother who will not hesitate to get her hands dirty for the sake of her child. And Amador, no stranger to villainous roles, is a nasty theater critic, whom you end up both loving and wishing to be dead.

The set design is deserving of recognition as well. When the lights turn on, revealing the Gillette mansion, there’s an almost inaudible gasp from members of the audience. As if the adults in the OnStage Theater seats have just witnessed something magical.

The Game’s Afoot ticks every box required to please theater-goers, whether newcomers or long-time aficionados. It is intelligent, plot-driven, and packed with verbal and physical humor. It reminds us as we laugh that everyone, including ourselves, is suspect. Let’s not forget that it also has the soul of a beloved fictional character.

That every generation has its own Sherlock star — and in our case more than two (add Johnny Miller and Ian McKellen) — speaks of the detective’s timeless appeal. “I suppose Sherlock Holmes still holds a special place for us today because he was the man of Conan Doyle who realized the importance of physical evidence,” mused Holme. “The CSI stuff that we see on television today is really a continuation of everything Conan Doyle (began) in his Sherlock Holmes mysteries — having a very precise and observant eye for physical details. I think that’s why he’s with us still.”

A great mystery is irresistible and more so is Sherlock’s allure. If Repertory Philippines aims to make theater a habit, then they may have taken the right step with The Game’s Afoot.