No girl power, only power

It must be my limited purview. When I gained consciousness, the nation was ruled by a housewife. Now, in my lifetime, I’ve seen two women presidents — and it might be three if we all survived this coming elections.

I grew up watching Ally McBeal and Charmed, both of which had female leads, the former in position of power (she’s a lawyer) and the latter, gifted with supernatural powers (they’re witches). In school, the deans, department heads, and the brightest, most opinionated students I had shared classrooms with were female. When I got out of school, I entered companies and publications where I worked with girl bosses and editors. In my own circle of friends, the ladies stick to their passions, make a living out of them, seek romance, nurture a family and look good doing it.

The concept of “girl power” was lost on me: there was only power, available in varying degrees to all members of the human race. I never thought that those people I mentioned had something others of the same sex were devoid/deprived of. As it turns out, their “normal” was the world’s “extraordinary.”

Sure I witness discrimination. One time I rode a cab that almost bumped into the car in front. The male cabbie sighed, “Tsk. Babae kasi ang driver.” He obviously didn’t notice that his passenger was a girl. But I don’t file instances like this under “misogyny” and cry foul on behalf of womenkind. I chalk it up to sheer impropriety. We’re all walking stereotypes and we see people as types, whether deliberately or subconsciously. You are measured in more ways than one: by your clothes, school, job, Twitter followers, literary preference, accent. Girlhood is a minor inconvenience.

To be honest, what’s distressing is this relentless invitation to fit the image of the modern woman: daring, outspoken, uncompromising, can-do-it-all and -do-it-better. It’s another suffocating box.

Notes on 'The House of the Scorpion' 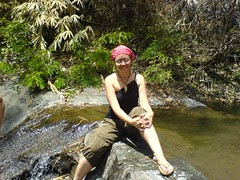