This would’ve been a piece I’d written for Mother’s Day, if only because it’s inspired by love between mother and child. But, cloaked in darkness, worm-infested, and teeming with sharp objects, this story is better reserved for Hallows’ Eve.

On the day Samuel was born, his father died. Growing up, his interest turns to magic, watching illusionists on TV and practicing tricks wearing his own shiny little cape. He also has a knack for building contraptions to kill The Babadook, a monster that haunts him and his widowed mother, Amelia.

The Babadook is black. Visible even in daylight, in plain sight, it is everywhere. Its long, tapered fingers are the bare branches of trees, and its garment, the shadow of the dead. The more you deny it, the stronger it gets.

Running a household on her own, without anyone to confide in, Amelia grows restless by the day, tired of Samuel and of life. Until unknowingly she lets The Babadook in, becomes it and goes after her own son. By this time — or perhaps all along — the child serves as the protector of his mother. Samuel employs his weapons and magic tricks to finally catch his monster. 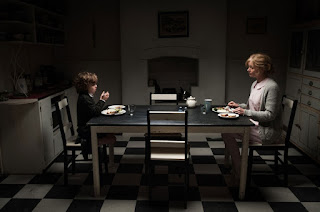 A creation of writer and director Jennifer Kent, The Babadook was released in 2014 in Australia to critical acclaim. In the film, Kent has given form to fear and placed it in the midst of one of the most enduring relationships in humanity.

The result is not a destruction but an acceptance of the trespasser.

Throughout the story, Amelia and Samuel take turns in fighting The Babadook. “I promise to protect you if you protect me,” utters Samuel, and it’s a straightforward, if naive expression of love in words. In the end they tame The Babadook, give it a home in their basement, and feed it worms from the garden.

If not for its terrifying components, the film can easily go in the direction of domestic drama. But framing it as such, as Kent herself says in The Dissolve, “would be so melodramatic and stupid.” She explains, “I like films where I’m forced to feel something… I want to be put through something. If cinema can be visceral, then it’s great. And horror allows that to happen unashamedly.”

Where The Babadook works for me, though, is with how it focuses its lens on the idea that our life-changing actions, especially when it comes to personal relationships, are rooted in fear as much as they are rooted in love. And whenever I find myself refusing to bear a child, declaring an incapacity to love, it is in fact an admission of a fear of failure to protect.

Because it is such a bother. Mundane things must be satisfied daily, like making sure your loved one has eaten when hungry and has rested when weary. And then there are tasks that require a superhero out of you — keeping them away from bullies, muggers, drunk drivers and manipulative girlfriends.

They say life is a gift, but no one says all presents are wonderful. I’m not ready to put into this world another soul, who, in a blink, can wander off into a hell hole. In what can be the scariest but also the most poignant scene in The Babadook, young Samuel, after stabbing her with a kitchen knife and knocking her off the stairs, has his possessed mother pinned down on the ground, telling her with so much fright, “Mom, I’m not leaving you.” I’m not ready to hurt someone for their own good and stay.

The Babadook is horror with a happy ending. After all the panic, you get a warm fuzzy feeling, knowing that all is well as you share a house with your family and your demons. While much of it is grounded in reality, it still treads the path of a fairy tale, if only because the main characters’ triumph is so sweet.

A mother and child bond to conquer their fears, both real and imagined — it’s a storyline we can only dream of in our own lives, or at least I know in mine. But even though I’m nowhere near the story’s bright resolution, I’m thankful that it has taught me to find use for all the worms I catch in my quiet garden.