The show I wasn't able to watch because 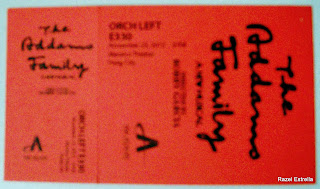 a) I went to the wrong theater.
b) I lost track of time.
c) I bumped into a crush and pretended I was free for dinner.

Hint: It was a stupid stupid reason.

For so long I've been watching musicals staged by Atlantis Productions at the Carlos P Romulo Auditorium in RCBC Plaza that I assumed The Addams Family is being shown there as well. I'm making excuses.

I double-checked the date and time, and even took note of the seat—everything but the venue.

Surely it happens to the best of us (as my companion said to console me), but there's something alarmingly wrong when you commit mistakes like this twice in roughly two months.
By Razel Estrella
Catalogued: Theater