go from theatre to film and back into theatre. 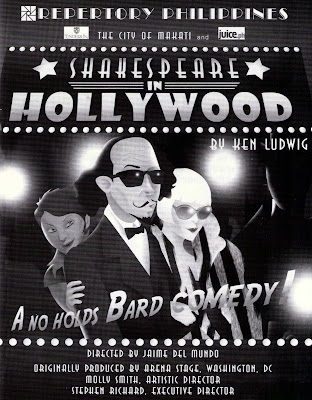 King of the fairies, Oberon and his servant Puck, thanks to the latter’s carelessness, found themselves in the set of Max Reinhardt’s film adaptation of A Midsummer Night’s Dream in 1934. Them being the real characters from the Shakespeare comedy, the two were instantly cast as themselves and had no trouble easing into the movie star lifestyle.

The production was going well until the chief censor Will Hays paid the studio a visit and huffed about the film’s immoral script.

As in the original play, Oberon ordered Puck to fetch the flower called love-in-idleness, whose juice can make “man or woman madly dote upon the next live creature that it sees”. The plan was to use this flower to distract Hays from sabotaging the film. Yet as in the original play, Puck messed up, gave the flower to the wrong man and the rest, we could say, was a riot.

That was Ken Ludwig’s Shakespeare in Hollywood, which was staged by Repertory Philippines on April 1 to 17 on Onstage, Greenbelt, under Jaime del Mundo’s direction. The zany story required a zany cast:

The reliable and flexible actor, Red Concepcion, was a nimble Puck. He was on every corner of the stage, giving off energy and occasionally stealing scenes even when in the background.

Chris Villonco’s overly pretentious Australian accent (of sorts), which she does so well, came into good use in playing Helena, who can be described as—to put it mildly—a bimbo. She happily and effectively played the butt of the joke. On her first appearance on stage, Villonco made it clear that her scenes are to watch out for.

Miguel Faustmann as Will Hays played to perfection a sophisticated and unbelievably conservative censor we all love to hate.

The rest of cast, which includes theatre mainstays as Joy Virata and Caisa Borromeo, gave a competent performance, though every now and then their comedic timing was off as punch lines were thrown and the audience responded with silence.

In a motion picture era saturated with adaptations and rehashes of classic texts, what might compel a playwright to put onto stage the workings of Max Reinhardt’s Shakespeare film adaptation? Why put Oberon and Puck in Reinhardt’s time shooting their story? The answer to the first question is perhaps to acquaint the audience with 1930’s Hollywood, the movie-making climate during the Great Depression and how Shakespeare was particularly used at that time. Ken Ludwig notes that back then, actresses who were “mistresses or wives of the studio heads wanted to be in such ‘prestigious’ movies to enhance their reputations”. As to why bring Oberon and Puck to that period, a more evident and less socio-politically aware reason can be gathered—true to Hollywood fashion, the play aims to deliver screwball entertainment and the fairies’ trip to the glitzy future opens up a variety of comedic situations.

The playbill recalls that “in A Midsummer Night’s Dream, [the flower love-in-idleness] leads to some unintentional coupling” then states that “[Ken] Ludwig takes Shakespeare’s example to even further extremes”. But the result is not entirely accurate.

In A Midsummer Night’s Dream, the mismatches made for situations that elicit both laughter and sympathy for the characters involved. Helena felt mocked when Demetrius, the man she was madly in love with, in the quickest sudden felt deep love for her too, even after a long time of ignoring and even being rude to her. To aggravate the matter, Lysander, who was about to elope with her sister Hermia, fell in love with her too while under the spell of the magical flower. When Hermia showed surprise upon learning that the two men in love with her were now in love with Helena, Helena was convinced that she was being triple-teamed by Demetrius, Lysander and Hermia for their amusement.

In Shakespeare in Hollywood, the mismatches were simply a means of delaying the inevitable coupling of those who were truly meant for each other. Nothing is greatly objectionable about this, only that the round of mistaken loves, which was supposed to be the funniest part of the show, was frustratingly short and short of frantic.

Shakespeare was undoubtedly re-imagined in the Hollywood we are familiar with. The costumes were fancy, the set design elaborate and the presentation had enough commercial appeal to please any appreciative audience who likes a bit of theatre, a bit of Shakespeare and a bit of Hollywood. It’s all good, clean fun (except maybe for a mention of bestiality). If popcorns were allowed in theatres, we should be munching on them while watching this play.
By Razel Estrella
Catalogued: Theater