Dwarfed by the islands of giants

We laid the pebbles and seashells on the bamboo table for a final inspection. My friend had what seemed like a semi-precious stone — a jade — though, too translucent, it might only be a shard of glass. “That’s a shard of glass,” said island caretaker Maruja. “But it’s not jagged, it’s smooth,” I protested, as if I knew what I was talking about. Maruja, without calling me out for my ignorance, explained that it was sea glass, “It’s a piece of broken glass polished by the waves.”

It wasn’t the first order of business to comb the shoreline for mementos to take back to Manila, but the island’s calm, iridescent waters beckoned us to look under and claim whatever we could carry with our two hands. A day’s worth of island-hopping had us looking under, above and beyond until we found things we could no longer tuck in our backpacks — larger rocks, limestone formations, a long stretch of sandbar, a green lagoon. Until we were struck by a splendour we couldn’t wrap our heads around.

Islas de Gigantes, a chain of islands in Northern Iloilo, Western Visayas, may not be the first destination that comes to mind when someone cries, “Beach, please!” But the photos should be enough to send you packing. I myself was compelled to book a flight after seeing a snapshot of Cabugao Gamay Island, or Maruja Flora’s Island Paradise Resort. 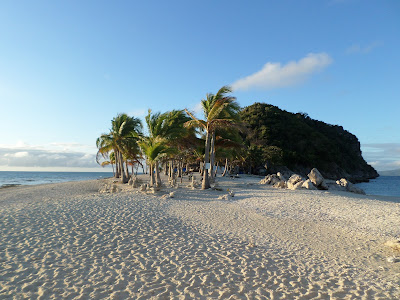 From Manila, a quick route to it is by way of Roxas airport in Capiz Province, then an hour or so boat ride from Bancal Port in Carles, Iloilo. Once there, you’ll concede that photographs, no matter how breath-taking they are, never do nature justice. And by the manner this piece is going, neither do words.

Cabugao Gamay on one end has a lush hill and on the other end a twin beach with a tall rock formation and sandbar at the tip (where we searched for souvenirs). Somehow it’s a shame to call it paradise, for the many places that attach themselves to the word don’t even begin to compare. Beautiful as it is, the island and resort are still recovering from the Typhoon Yolanda beating, but as Maruja pointed in the beginning, that’s what nature does, if not destroy what men have built, transform them, and during the course reshape its own land and seascapes. “Every day, the sea looks different,” the lady said.

Other islands in Gigantes (to give it a nickname) are not as popular, though are every bit as idyllic as Cabugao Gamay. Going to four or five of them will only take a couple of hours. I suggest you don’t. One island is enough to blow the mind. But do stop by Pulopandan or Gakit-Gakit, a tiny island that used to be inhabited by three coconut trees until the typhoon uprooted the other two. Keep the lone tree company.

Gigantes is also known for caves and story has it that when the Spanish settled in, enormous corpses were discovered within its caves that people believed giants walked on its grounds. Thus the name Islas de Gigantes. We saw the mouth of a cave (not giant, no) in the Tangke Saltwater Lagoon but dared not look further. In retrospect, there was no reason to be scared. When Typhoon Ruby battered the Visayas in 2014, residents were reported to have taken refuge in the Gigantes caves. Meanwhile, adventurers go to caves like Pawikan to hunt for treasures. There’s even an enticing myth that all of Gigantes’ caves connect to the provinces of Capiz and Masbate and the municipality of Pilar.

On the boat ride from Tangke back to Cabugao Gamay, I observed the islands — amazed at how close they were to each other — and wondered how they must look like joined underneath the ocean. Where do they stand? And still deeper, what’s there? When I shared these thoughts to my companion, there was a glint in her eyes and she exclaimed, “I was thinking the same!”

Then more questions came. Like how a single tree can survive on an island, how sandbars shift, how caves can be both graveyard and sanctuary, how water turns sharp glasses into the smoothest of stones.

There must be answers somewhere — in textbooks, on the Internet, but they were out of reach. And there was something about the sea and sky, that blue embrace that make you revel in mystery, resign to your smallness and flirt with the idea that maybe some giant, too big to be seen, is holding this entire world together.