Not for nostalgia but knowledge

One thing that undersecretary Manolo Quezon III reiterated during his lecture on the opening day of “Defining Quirino,” a commemorative exhibit at the Ayala Museum, was: “Today began yesterday.” These words he borrowed from writer Leon Maria Guerrero.

Part of the Philippines’ yesterday included Quirino, whose legacy the nation enjoys today — minimum wage, eight-hour work laws, the social security system, and standardization of teachers’ salaries. The unfortunate fact is not many are aware of who Quirino is beyond being a former president of the republic, a reason that the President Elpidio Quirino Foundation, Inc. came up with the exhibit. 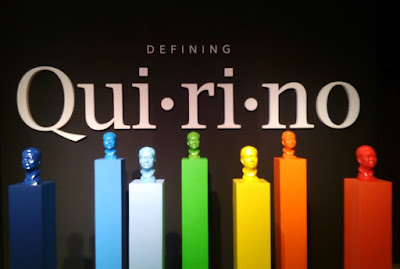 Quezon presented to the audience a Quirino who is at his core a broken human being just like you and me. We heard his voice and saw him in his trunks, about to dive into a pool. We saw photos of him soon after he was informed of then president Manuel Roxas’ death. Quirino was a vision of a leader in control of the situation. Not until the next photo, which shows Quirino crying by the casket. Those photographs portrayed a man who is both prepared and not, a man who is both tough and fragile. Personally, the images evoked some of my deepest fears: losing someone important and taking on responsibilities I didn’t ask for, at least not for the time being. Quirino weathered all these and more. His family was taken from him during the war. How does one recover from that?

We were also reminded of the difference between a politician and a statesman, and that Quirinio exemplified the latter. Trivia: he became notorious for sleeping in a P5,000 bed (then an extravagant amount). “But he bought it,” Quezon noted, “and he left it at the palace.” Quezon also pointed out that, thinking of the next generation, Quirino was among the first, if not the first to assert the importance of claiming the Spratly archipelago. And when he lost to Ramon Magsaysay in the next elections, he welcomed him to the office — an act of goodwill we barely witness in the political arena.

Quezon said something amusing before the start of his talk: “Usually there would only be around 15 people in a lecture like this,” and he referred to men and women who already knew the subject. That time, the ground was filled with students (granted, they were required to attend by their teachers). He confessed it would be a challenge to introduce someone who lived half a century ago to those born in the ’90s. But should it not be the point of exhibits — (re)discovery? Hopefully the afternoon at the museum served as an opportunity for both young and old, strangers to and friends and relatives of Quirino to look at a historical figure and what he means to them with a clearer head, without a nostalgic filter. It was, after all, an invitation to define Quirino.