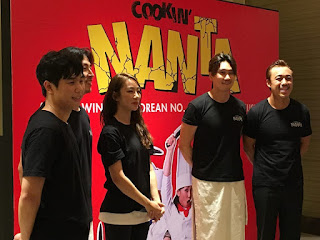 Remember playing in the kitchen when you were young? No, not experimenting with food but making a mess. And making musical instruments out of pots, pans, and ladles, only what came out wasn’t music but noise. Or maybe you still do it now that you’re all grown up. You sauté mushrooms while wiggling to techno beats. You tap the spoon on a glass while waiting for the oven ding!

What you do spontaneously at home, a group of Korean artists has turned into an hour and a half of performance art. Cookin’ Nanta, as presented at the start of the show, is a top tourist attraction in Korea and has toured around the world since its 1997 premiere. In Manila, the show continues its first and limited run until Nov. 15 (Sun.) at The Theatre, Solaire.

There’s barely any cooking in Cookin’ Nanta. It’s essentially a percussion show mixed with comedy and circus acts. That there’s a story — no matter how flimsy — holding the performances together, makes the five people onstage more endearing than they already are. With their restaurant chosen to cater a wedding party, a team of chefs is tasked to finish a demanding menu in an hour, at exactly 6 o’ clock. Their condition is aggravated by the arrival of their hot-headed boss’ nephew, who, by way of nepotism, instantly becomes a new chef, taking the hat of one of the older chefs. There’s also some romance injected in the musical.

The connection between the performers and the audience is Cookin’ Nanta’s not-so-secret ingredient. To say that there’s audience participation involved is inaccurate as the characters onstage communicate with the people in front of them the entire night, whether by directly asking them to come up on stage, making eye contact, or reacting to their reactions. The best parts of the program are when members of the audience don’t respond the way they’re expected to. And the performers’ way of dealing with the situation is a pleasure to watch.

But where you’ll go Whoa! is when the four chefs are at their stations, chopping vegetables. Onions, cucumbers, carrots and cabbages fly — gracefully — onstage and onto the audience. And then it hits you: they are drumming, playing with knives. You are amazed and at the same time thankful that you’re not in the front row, because you remember those concerts in which you’ve seen the drumsticks slip from the drummer’s hands.

The combination of food, music, and dancing is not a rarity in entertainment. Cookin’ Nanta succeeds not because it’s new but because the artists are simply too good at what they do. They’ll make you want to grab your own pair of drumsticks. They even make slapsticks genuinely hilarious. “Nanta” means “to strike relentlessly,” and the cast proves they’re more of musicians than cooks in the finale. They remove their chef uniforms and don skintight tank tops and pants. They are no longer the clumsy, carefree and funny characters they portray. They are five rockstars who make banging plastic containers cool.