I am not one to believe the best things are for free. But I'd take what's free any time.

It was in my senior year in high school when cellular phones became so fashionably necessary, and in the blink of an eye, the cell phone had been as ordinary as a pen and a hanky. Everyone had them. I didn't have one then. Until my sophomore year in college. I had my first authentic gimik. I hung out with new-found friends at the Remedios Circle in Malate till 4 AM. Going home, I expected a full hour or two of reprimand from my parents, but I received the silent treatment instead. The next night, I became the new owner of a Nokia 3210.

I'm not crazy about cell phones. Nokia features such as games are wasted on me. My average text messages sent per day is roughly 1. I have never—ever!—consumed my P300 load in two months. I hardly make calls. If I need to call someone, I look for the nearest pay phone. For 5 years, my Nokia 3210 has stayed with me—till its backlight's dysfunctional, till it can already be considered vintage, Jurassic. I would still hold on to it, if not for my Ate. 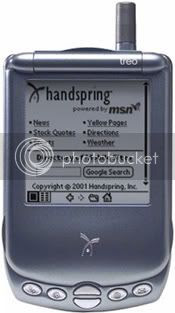 From out of the blue, she gave me a very old model of a Handspring Treo. The display's still in black and white, but it doesn't matter; a part of me can endure without color. It's a nice toy and it's once again for free. I appreciate it because it functions as a palmtop and cell phone and you can access the internet through it.

With this new gadget comes one of my most favorite activities in the world: organizing, personalizing.

My phone book's a bit of a revelation, there's so much space. My date book's no surprise, there are no dates. The only game I enjoy from the 5 games available is Hardball (which is really a version of Arkanoid, which reminds me of yesteryears with Nintendo).

Now this is the part where I'm supposed to be wrapping up this entry and express some sort of epiphany. There is none. I don't know. Call me. Gift me with a laptop.
By Razel Estrella
Catalogued: Digitale