If I Were A Planet

This question hasn't been asked to me or by me before. Now that I'm thinking of it, I have not a clue as to an answer.

But by some mysterious forces of the universe, in its usual machinations and elusiveness, an answer. I am Saturn.

According to Wikipedia, "Saturn is a popular setting for science fiction novels and films, although the planet tends to be used as a pretty backdrop rather than as an important part of the plot."

For a few more facts:

In Roman mythology, Saturn is the god of agriculture....Saturn is the least dense of the planets; its specific gravity (0.7) is less than that of water.

Saturn rotates very fast on its axis, but not at a uniform rate. 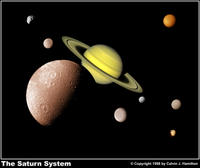 What makes Saturn one of the most beautiful objects in the solar system is its ring system....The origin of the rings is obscure. It is thought that the rings may have been formed from larger moons that were shattered by impacts of comets and meteoroids. The ring composition is not known for certain, but the rings do show a significant amount of water. They may be composed of icebergs and/or snowballs from a few centimeters to a few meters in size. Much of the elaborate structure of some of the rings is due to the gravitational effects of nearby satellites. This phenomenon is demonstrated by the relationship between the F-ring and two small moons that shepherd the ring material.

The whole system is very complex and as yet poorly understood....Like the other jovian planets, Saturn has a significant magnetic field....When it is in the nighttime sky, Saturn is easily visible to the unaided eye. Though it is not nearly as bright as Jupiter, it is easy to identify as a planet because it doesn't "twinkle" like the stars do.

What I fall towards to? That question I've tried asking before and still have no answer. Or because I have so many answers. But to make things easier, to generalize: that the fictive becomes palpable.
By Razel Estrella